This branch is connected to Claudia's HUNT and HENSON paternal lines.
​ 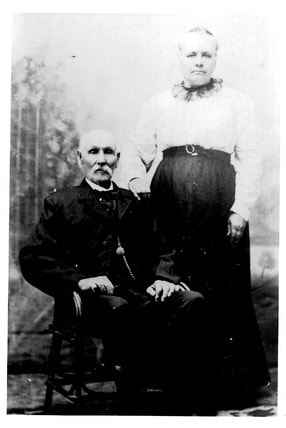 William and Zerelda were married on 22 Aug 1850 in Peoria Illinois, and had four children in Illinois including Claudia's great-grandmother Mary Jane CROW (1856 - 1934).  When Zerelda died in 1891, they were living in Lockwood, Dade County, Missouri.  William served as a private in the 47th Illinois Infantry for the Union during the Civil War.  In 1895, William married a second time to Margaret Jane (Henley) McAlister.

In the 1917 obituary for William "Uncle Billy" Crow in Lockwood, Missouri, it says in part:

"Mr Crow was born in Jackson county, Ohio, February 9, 1828 and died January 26, 1917, in the 89th year of his age.  He was married to Miss Zeralda Paterson August 23, 1850.  Three children survive this union, they are: Wm. Crow, of Bedford, Iowa; Mrs. Mary Hunt, of Alberta, Canada, and P.A. Crow, of Corpus Christi, Texas.  The wife and mother preceded them in death a number of years ago.  Mr. and Mrs. Crow moved from Illinois to the Round Grove neighborhood in 1877 and to Lockwood in 1881.  He was married to Mrs. Margaret McAllister, in 1895, who survives. He was one of Lockwood’s oldest residents, having resided here continuously since 1881."

William's daughter Mary Jane CROW was born 18 Aug 1856 in Illinois, and married Joseph Alexander "Alex" HUNT on 1 Dec 1880 in Lawrence County Missouri.  They had four children in Missouri, including Claudia's grandmother Bessie Mae HUNT.  By 1900 they were living in Henrietta Town, Clay, Texas, and then in Elmwood, Beaver, Oklahoma by 1910.  Sometime around 1913 Joseph and Mary Jane HUNT moved to Alberta Canada with their youngest daughter Hettie.  Their oldest daughter Bessie and her husband H Angus HENSON also emigrated to Alberta around the same time, and both couples received land grants in the Flat Creek and Boyle area.  They are both buried in Boyle, Alberta, Canada.

See the HUNT family page for photos of  this family, including Mary Jane and Alex HUNT.

Zerelda Margaret PATTERSON was born 9 Jan 1829 in Kentucky. She likely had a sister Teressa Jane Patterson (1822-1882) who also married a CROW in Illinois.  Details of their parents are uncertain; census indicates their father was born in North Carolina and their mother Margaret in South Carolina. The 1850 US census in Warren County Illinois lists the newly married Zerelda and William CROW living with Margaret Patterson 62 SC and Teressa J Patterson 22 KY.

Zerelda died 22 Aug 1891 in Lockwood, Dade, Missouri where she is also buried.
​DISCLAIMER: Research is ongoing; this page includes uncertainties and may contain errors.