Also check out our blog for BOORMAN-related stories. 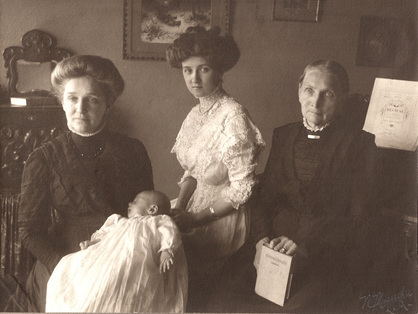 4 generations, Kerfoot, Johnston & Neeland lineage. From L to R: Deborah S (KERFOOT) JOHNSTON holding grandson William Irvine BOORMAN Daisy Louise (JOHNSTON) BOORMAN Eliza Jane (NEELAND) KERFOOT
One of Terry's paternal great-grandmothers was Deborah Saphronia KERFOOT. She was born in 1855 in Huntley, Carleton County, Ontario, the oldest child of Samuel KERFOOT (1834-1906) and Eliza Jane NEELAND (1834-1918).  In 1871 Deborah lived in Smith Falls Ontario with her parents and five younger siblings.  According to another researcher, this family then "moved to Emerson, Manitoba in 1879 and two years later to Drayton, North Dakota, U.S.A. where [Samuel] carried on a photographic business.  Later they retired to Vancouver to join a daughter Deborah where they remained until their deaths."

It seems that Deborah never moved to the States with her parents, as she married James Irvine JOHNSTON on 27 Jan 1881 in Emerson Manitoba.  Together they had six children, the first four in Emerson and the youngest two after they moved to Vancouver BC.  Deborah died there as a widow and is buried in Mountain View Cemetery, Vancouver.

Deborah's father Samuel KERFOOT was born in 1834 in Beckwith Township, Lanark, Ontario, the son of George KERFOOT and Deborah SMITH.  Samuel married Eliza Jane NEELAND, also born in Ontario in 1834,  on 24 Aug 1854 in North Gower Ontario.  We believe they had 11 children.

The KERFOOTs, however, have been traced back a few more generations to Coolcullen, County Kilkenny, Ireland.  George KERFOOT was born is 1796 in County Kilkenny, the oldest son of William Kerfoot (1776-1862) and Elizabeth Bradley WILSON (1765-1858) who also emigrated to Ontario, Canada.  And according to other researchers, William was the son of another George (1742-1819) and Eleanor KERFOOT.  Eleanor died in Ireland before 1819, but George made the journey to Canada with his extended family.

From the 1953 book: A KERFOOT HISTORY: Canadian Branch by J.M. Morris (1856-1936):
“The Kerfoot Family in Canada was founded by George Kerfoot who came from Coolcullen, County Kilkenny, Ireland, an aged widower with children, grandchildren and two great grandchildren, in 1819....Kerfoot party apparently included George, son William (with wife Elizabeth), grandson George (with wife Deborah and two small children), and three other grandchildren. ...(and others).”

Another accomplished researcher suggests that this elder George KERFOOT was the son of Thomas and Mary KERFOOT of Coolculllen, but considering how early this is for Ireland records, it has not been possible to prove this yet with certainty.

This is Terry's descent connecting back to his Irish KERFOOT  line:
NEELAND FAMILY

​According to Eliza Jane NEELAND's BC Canada death registration, her parents were both born in Ireland:
Nothing further is known about this branch.
​Spelling variations for NEELAND include Neelands, Neelen, Neely?

Deborah SMITH (SMYTH), who was born in 1798 in Coolcullen, Kilkenny, Ireland, is believed to be the daughter of:​
Nothing  is known about earlier SMITH and WARREN ancestors.
​