Alternate surname spellings: HOPGOOD, HOPEGOOD, HAPGOOD, HABGOOD ...
​​
Claudia's maternal 3rd-great grandfather was William HOPGOOD, farmer, and that's all she know so far about him and his ancestry, with any certainty.  And even that may be suspect!

​Here is Claudia's maternal pedigree leading back to this  HOPGOOD mystery: 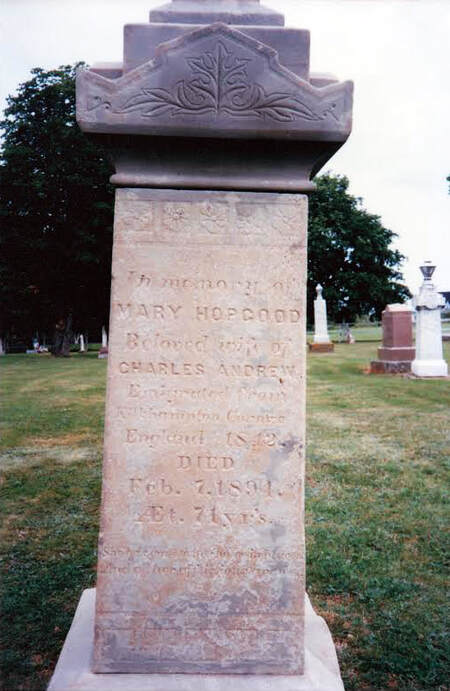 My HOPGOOD research has been trying to break down a sturdy brick wall for some time.  In 2015 I posted an article about my maternal great-great-grandmother Mary HOPGOOD and my struggles to learn more about her and her ancestors.  That article lays out the background details that I will build on in the following update.

Mary HOPGOOD’s birthdate on Christmas day 1823 is known only from family sources, and has not been verified.  I cannot identify her baptism record (and therefore her parents names and location).  The earliest 1841 England census is also inconclusive - at that time Mary was probably 17 and not yet married, but would have been very pregnant.  So that would probably explain why I cannot find Mary living with her father William in 1841.

There are a couple of possible sightings for Mary in the 1841 census, just across the Devon border in Woolfardisworthy OR Barnstaple, where she may have been living as a servant with another family.  There were at least 2 corresponding Marys around the same age in this area: my Mary (daughter of William who married Charles Andrew in Stratton in 1842), and Mary (daughter of Richard and Rebecca) who  was baptised 22 Feb 1824 in Woolfardisworthy. And to match, there was a Mary Hopgood married in the Bideford Distrrict (including Woolfardisworthy) in the 3rd quarter of 1842.  So if we apply all the Woolfardisworthy events (baptism, marriage, 1841 census) to Mary daughter of Richard,  then my Mary may have been the one living in Barnstaple in 1841 as a female servant with the Cutcliffe family. (It's interesting that next door was another Cutliffe family employing Fanny HOPGOOD age 65.   Tracing Fanny, she was likely baptised in 1772 in Clovelly, daughter of Thomas 1735 in Clovelly, and the granddaughter of John  and Frances (Haydon) HOPGOOD who married in 1722 in Clovelly.  But I can't prove a relationship to Fanny yet.)

Mary's illegitimate daughter Mary Ann ANDREW was born 14 Aug 1841 (as per the Canadian 1901 census).  The birth was registered in the Stratton District of Cornwall, England under the surname ANDREW, not as HOPGOOD which would be the norm in such cases.  So I'm fairly confident that Charles ANDREW (a native of Kilkhampton Cornwall) was her birth father.  On 28 Mar 1842, Mary HOPGOOD married Charles ANDREW in Stratton Cornwall, likely en route to board a ship bound for Canada.  They departed about 2 weeks later, taking their daughter Mary Ann with them to a new land and away from family and community, for a new start together.

Charles and Mary settled in Prince County PEI, where there was already at least one Hopgood family from England: Thomas and Mary (Yeo) Hopgood emigrated from Kilkhampton between 1837 and 1839.  (The Yeo family were prominent shipbuilders in Devon and PEI.)    I would like to to believe that their 2  families knew each other back in England.  And perhaps they are related?  We don't yet know.   But if so, perhaps they influenced Mary and Charles to come to PEI, and were their welcoming committee when they arrive.  But this is pure conjecture.

Charles and Mary's young family thrived in PEI, Canada, with the birth of 8 additional children including my great-grandfather William ANDREW.  According to her gravestone, Mary died Feb 7, 1894,  aged 71 years.

​
IN SEARCH OF WILLIAM HOPGOOD

I first learned that Mary's father was William HOPGOOD, farmer, from her marriage certificate when I traced Mary Hopgood from PEI Canada (where she died in 1894) back to Stratton in the north of Cornwall (where she married Charles Andrew on 28 Mar 1842).   Unfortunately I still can't find any indication of an identifiable William Hopgood fathering any children (including my Mary) in this area. And I can't find any marriage records for William either.  So where did my William farm?  And where and when did he marry and die?  Who was Mary's mother?  Where was Mary born and baptised?  Did she have any siblings? Where was William when Mary met Charles ANDREW?   (Dare I contemplate the possibility that  my Mary's father's name William was either mis-recorded or falsified on her marriage certificate?  Charles' father was also William, and she may have been estranged from her family, so such things could happen.  But that would only widen the field of possibilities again.  I'd rather be an optimist! )

Looking at HOPGOOD naming statistics and distribution in the UK in 1841, I learned that the HOPGOOD surname was most prevalent in Hampshire and Wiltshire, with smaller clusters in north Cornwall / Devon and in other counties in southern England.   And although the most common male first name is said to be William, there aren’t many Williams in Cornwall / Devon (Richard and Thomas are more common).   Which group did my William and Mary belong to?  Were they natives of north Cornwall / Devon, or where they newcomers or visitors to the Stratton area of Cornwall?

William was likely born before 1800 based on his daughter's age.  Although daughter Mary was married in the Stratton parish church in Cornwall in 1842, there were no Hopgoods living there in 1841, so I doubt the family was based in Stratton.  But there were Hopgoods in nearby Kilkhampton where the  ANDREWs lived. The town of Kilkhampton in Cornwall is very close to the irregular Devon border on the northwest shore.  Life in this corner of England pays no attention to the invisible county border, and topography seemed to favour  more  interacctions and connections with the Devon side than to lower Cornwall.  The cluster of communities of Kilkhampton, Morwenstow, Poughill, Hartland, Clovelly and Woolfardisworthy  (Woolsery) that straddle the Cornwall and Devon border were all home to Hopgood families.  So this general area was the logical location to start searching.

In spite of the significant number of Hopgood baptism records in this area starting in 1685,  I could find only 1 William HOPGOOD  born in the right time period: William Hopgood was baptised 29 Jul 1787 in Kilkhampton, base born son of Susanna Hopgood.  He would have been 36 when Mary was born - a plausible age.   So far this William is my number 1 candidate.

​From church records, I have been trying to piece together other HOPGOOD family units and their interconnections, started in these locations where I'm guessing Mary had relatives.  This is how I learned of the contemporary Mary born 1824  in Woolfardisworthy (as mentioned above) and rule her out because her father was Richard. But the shortage of records for a William in this area doesn't give me much to grab hold of.

Looking farther afield for William in other locations (Hampshire, Wiltshire, the USA and more),  I have able to discount at least 1.  There was a William Hopgood who married a Charlotte Church in 1813 in Vernham Dean, Hampshire, with a matching William and Charlotte who emigrated to Rutland NY, USA in 1832 with their 7 children.  The passenger list kindly lists their names and ages, including William age 45 and  Mary age 8 (the perfect age for my Mary). This Mary was not listed with her parents in any subsequent US census, but that could be because she died in 1839 in the US, according to findagrave.  So I don't think this William is the right one.

There are still a lot more of these other Williams to check out.  I am reminded that not all  records exist online or off, so perhaps some of William and Mary's records are not available.  Bu I'll keep looking for more details, hoping to substantiate one of my theories.  Or perhaps create new ones.
EARLY HOPGOOD FAMILIES  in NORTH CORNWALL & DEVON, ENGLAND
​Based on baptism & marriage records - no proven relatives yet - list may not be complete
​Looking for William HOPGOOD, born between 1770 & 1800, and his daughter Mary HOPGOOD, born 1823.