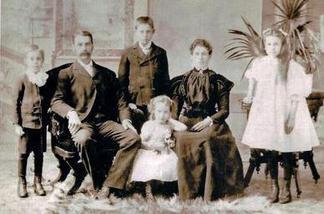 Sydney & Ella Richardson and family
Claudia's maternal grandmother was Eleanor Louise RICHARDSON, known as Nell.  She was born in 1894 in Prince Edward Island, Canada, the youngest of 4 children born to Sydney RICHARDSON and Ella COMPTON (although a fifth and youngest child died as an infant). Nell married Harry Charles ANDREW and had 7 children on their family farm in North St Eleanors PEI.  Nell stayed behind in PEI after WWII to nurse her ailing parents, but about 1950 she joined Harry and some of her grown children who had settled in the Cowichan Valley on Vancouver Island, BC.

Nell's father Sydney RICHARDSON was born in 1862 in Norfolk England and moved to Ontario Canada as a young bachelor in the early 1880s to join Richardson relatives and to learn the cheese making trade.  He must have been a quick study because in 1882 he accepted an offer to move to Prince Edward Island and start up their first cheese factory there.  He was soon winning awards for his cheeses.  In 1885 he married Ella COMPTON, and together they raised four children, the fifth dying as an infant..  Nell Richardson's three older siblings were:

Sydney's parents were Henry Proctor RICHARDSON (Jr), born 1825 in Brede Sussex, England and Elizabeth HARRIS, born 1828 in Lower Slaughter, Gloucester, England.  They were married in Lambeth London in 1853, and moved to Cranbrook Kent where their first 3 children were born.  Henry then moved his family to Weston Longville in Norfolk to work as a gamekeeper, and where five more children were born.  In later years Henry and Elizabeth moved to Derby to be near their oldest daughter Mary Jane (Richardson) LEWIS and her family.

Henry Proctor RICHARDSON (Sr), born about 1789, married Ann PACKHAM / PECKHAM of Appledore Kent in 1819 in Brede Sussex.  He was a farmer and also a parish clerk.  Together they had 9 children in Brede.  Ann died young at age 38 giving birth to her daughter Mary, who also died a couple of months later.  Henry died in 1850 at age 61. 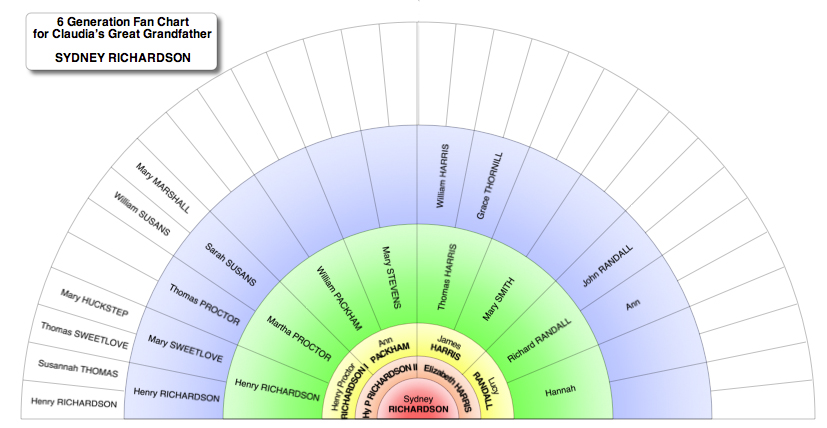 Click on a thumbnail to view a larger photo, or press the "Play" button to automate the slideshow.
​DISCLAIMER: Research is ongoing; this page includes uncertainties and may contain errors.