More photos have been added at the bottom of the page.
​ 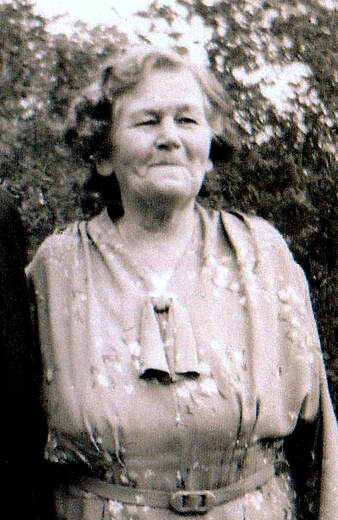 Bessie Mae HUNT (1886 - 1968)
Alberta, Canada
Claudia's paternal grandmother Bessie Mae HUNT was the oldest of three daughters of Joseph Alexander "Alex" HUNT (of Missouri) and Mary Jane "Mollie" CROW (of Illinois) who were married in 1880 in Lawrence County, Missouri.  The family moved from Missouri to Clay County, Texas before 1900, and they moved again before 1910 to Elmwood, Beaver, Oklahoma.  It was there that Bessie married Henry "Angus" Henson of Logan OK on 11 Aug 1910.

Bessie's parents once more got itchy feet and heard about homesteading opportunities in Alberta Canada. They decided to make the move along with their youngest daughter Hettie Hunt.  Their daughter Tanie was already committed to a teaching contract in OK, so she stayed behind.  Records tell us that Alex made a homestead application on 27 Apr 1911 when residing in Flat Creek Alberta, quite a distance north of Edmonton.  They moved onto their quarter section of land in the Boyle Alberta area on 24 May 1911, and their log cabin was erected by Aug 1911.

Angus and Bessie also emigrated to Canada between Feb 1913 (when their 2nd child Wayne was born in OK), and Aug 1914 (when their 3rd child Ethel was born in Flat Creek, Alberta) .  They also homestead in the Boyle area near her parents.  It was a hard life, yet they managed to raise 7 children there: Pearl, Wayne, Ethel, Mildred, Claude (Claudia's father), Mae and Dick. After Alex died in 1928, Bessie cared for her mother Mollie until her death in 1934.  Angus and Bessie both passed away in 1968 in Alberta, Canada.

Bessie's paternal HUNT line has been traced back through Alex's parents Jonathan HUNT and Malinda Sarah POLAND to Jonathan's parents John HUNT (1792 North Carolina) and Elizabeth ALLEN (abt 1797 Virginia), and tentatively beyond.

Credit for much of the information on this page goes to other researchers.  Not all has been verified. 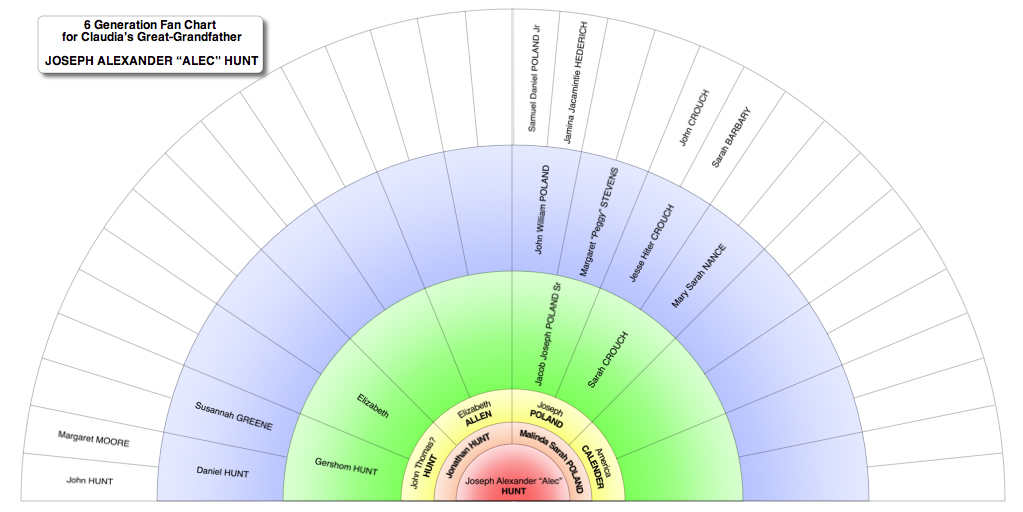 Claudia's paternal great-great grandparents were William CROW Jr. (1828 - 1917) and Zerelda Margaret PATTERSON (1829 - 1891).  They were married on 22 Aug 1850 in Peoria Illinois, and had four children in Illinois including Claudia's great-grandmother Mary Jane CROW (1856 - 1934).  Mary Jane was born 18 Aug 1856 in Illinois, and married Joseph Alexander "Alec" HUNT on 1 Dec 1880 in Lawrence County Missouri.  They had four children in Missouri, including Claudia's grandmother Bessie Mae HUNT.  By 1900 they were living in Henrietta Town, Clay, Texas, and then in Elmwood, Beaver, Oklahoma by 1910.  Sometime around 1913 Joseph and Mary Jane HUNT moved to Alberta Canada with their youngest daughter Hettie.  Their oldest daughter Bessie and her husband H Angus HENSON also emigrated to Alberta around the same time, and both couples received land grants in the Flat Creek and Boyle area.  They are both buried in Boyle, Alberta, Canada.

William S CROW Jr. was born 9 Feb 1828 in Athens County Ohio,  the son of William CROW and ? SNOOK of Ohio.   William died 26 Jan 1917 in Lockwood, Dade County, Missouri.  See the CROW page for the photo of William  Crow and his second wife Margaret.

Zerelda Margaret PATTERSON was born 9 Jan 1829 in Kentucky. Nothing is yet known about her parents and ancestors.  Zerelda died 22 Aug 1891 in Lockwood, Dade, Missouri.​

​Bessie's maternal CROW line has been tentatively traced to Mollie's ancestors  William CROW (1758-1854) and Margaret PAGE.  They were married in 1789 in Virginia; he died in Kankakee Illinois. 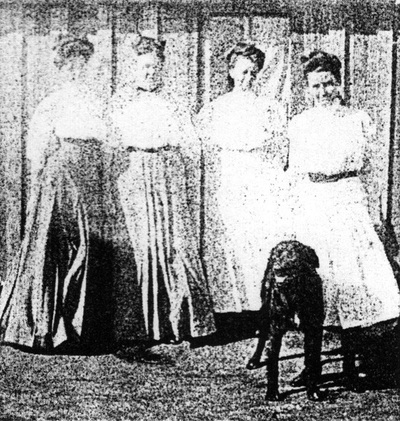 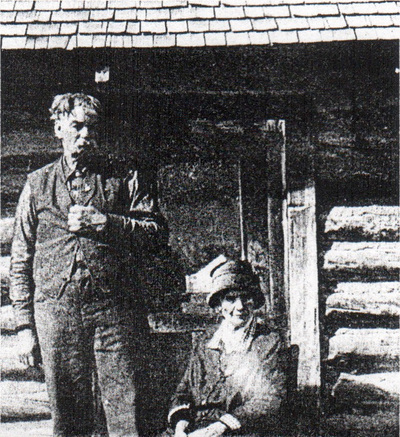 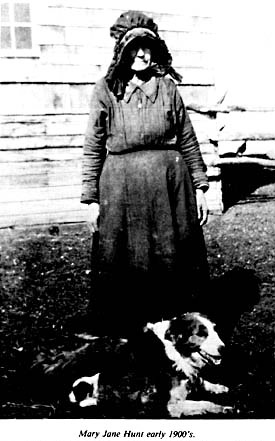 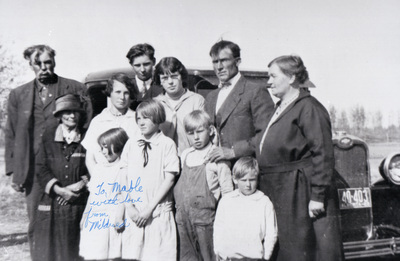 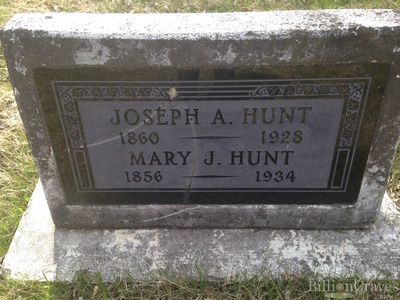 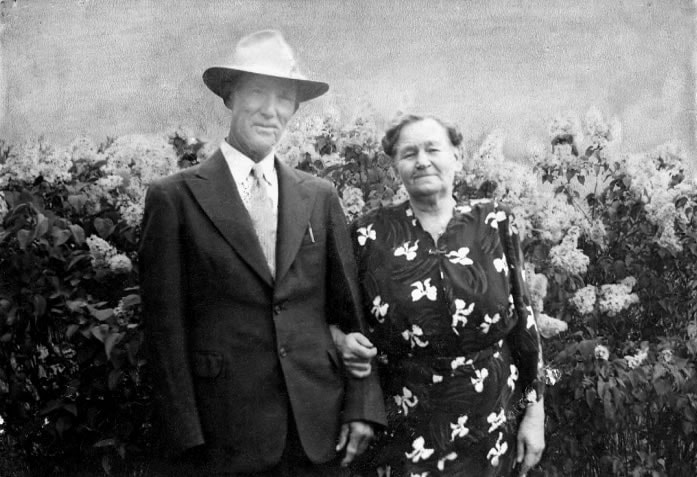 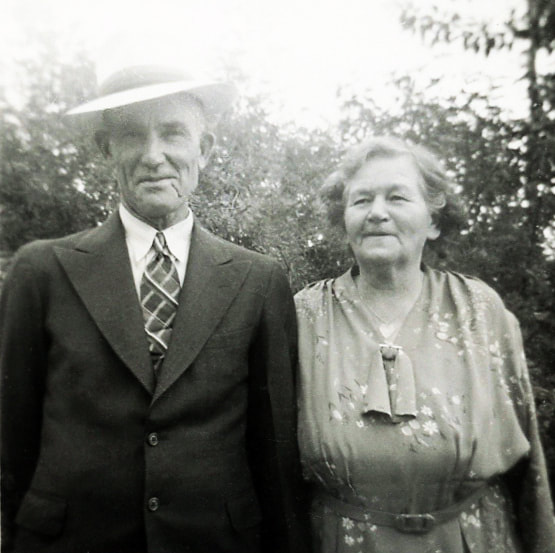 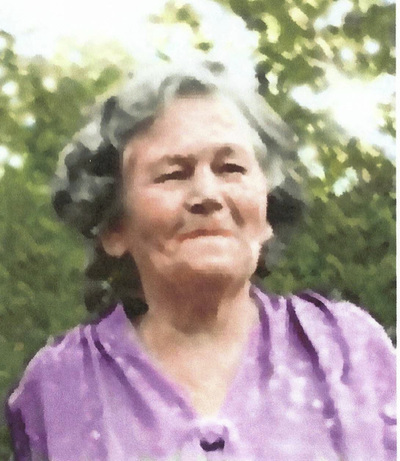 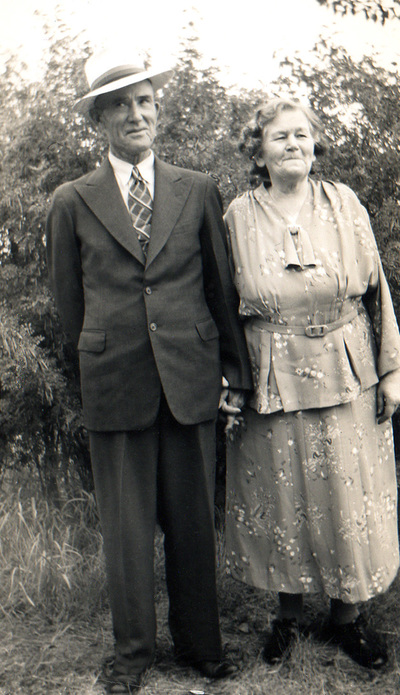 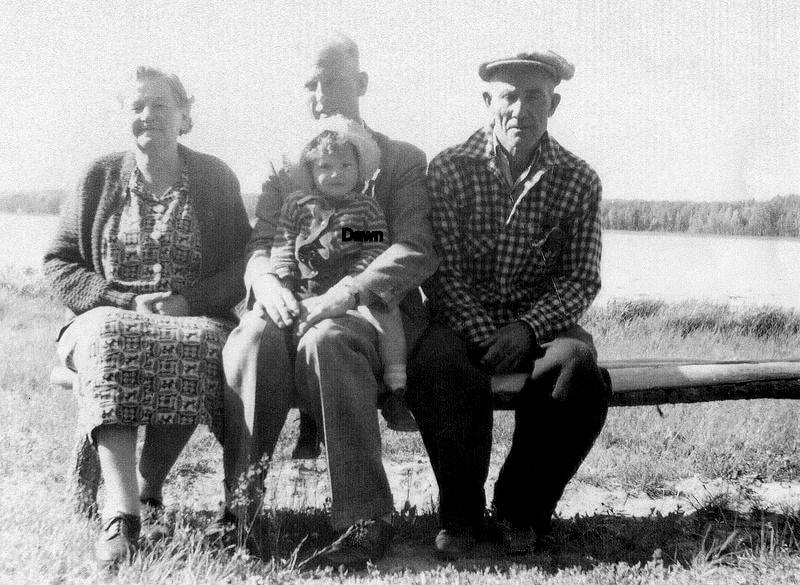 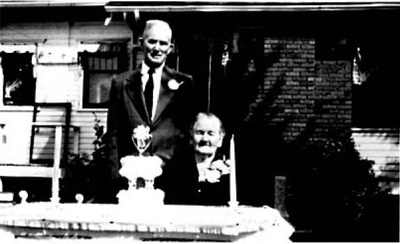 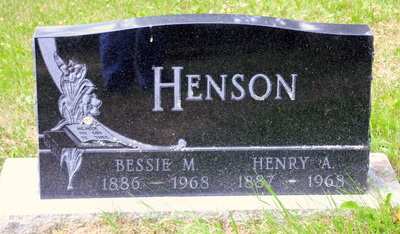 The Hunts generally had large families and a propensity for recycling similar first and second names among cousins and between generations.  Unfortunately, this makes it easier to mistake records and even photos of relatives with the same name.

Such is the case for Claudia's grandmother Bessie Mae (HUNT) HENSON, born 28 Aug 1886 in Missouri USA, who died May 1968 in Camrose Alberta Canada.  She is the daughter of Joseph Alex HUNT and Mary Jane "Mollie" CROW.  She is shown in the above photos, primarily as an older woman.  I wish I had a clearer photo of her when she was younger.

We have now found a different Bessie May (HUNT) LYONS, born 16 Aug 1890 in Missouri USA, who died 20 Aug 1970 in Missouri USA.  She is the daughter of Jonathan Wiseman HUNT and Bell CANNADY.

These two namesakes are 2nd cousins to one another, both born in Missouri 4 years apart, and who died 2 years apart in different countries.  Both are related to Claudia, but only one is her paternal grandmother!

Needless to say, this has caused confusion and instances of mistaken identity.  I'm now trying to rectify this.

Some years ago, another family researcher shared a colourized photo of a younger Bessie May Hunt, claiming it was Claudia's grandmother Bessie.  Then we  found a black and white version of the same photo in a tree on ancestry.com, but it was identified as the other Bessie May (Hunt) Lyons.  I have now been in contact with the owner of this portrait, which had been cropped from an identified larger family photo, and he kindly shared this family photo with me.  This proves that Bessie belongs to the LYONS family rather than the HENSON family.

Although this is NOT my grandmother, she is my relative.  And I for one can see a family resemblance!

​
The following photos are only a few of the images that should be attributed to
the OTHER Bessie May (Hunt) Enke Lyons Edwards (1890-1970) and family.
​*** Please remove them from your Henson-Hunt family records. ***

The following  family portrait, courtesy of Bud Cullens Jr., shows the other Bessie May HUNT (1890-1970) with her
2nd husband Alexander LYONS, her daughter Ruth (Enke) from her first marriage, and 2 of their daughters Viva and Myrtle LYONS, c1913 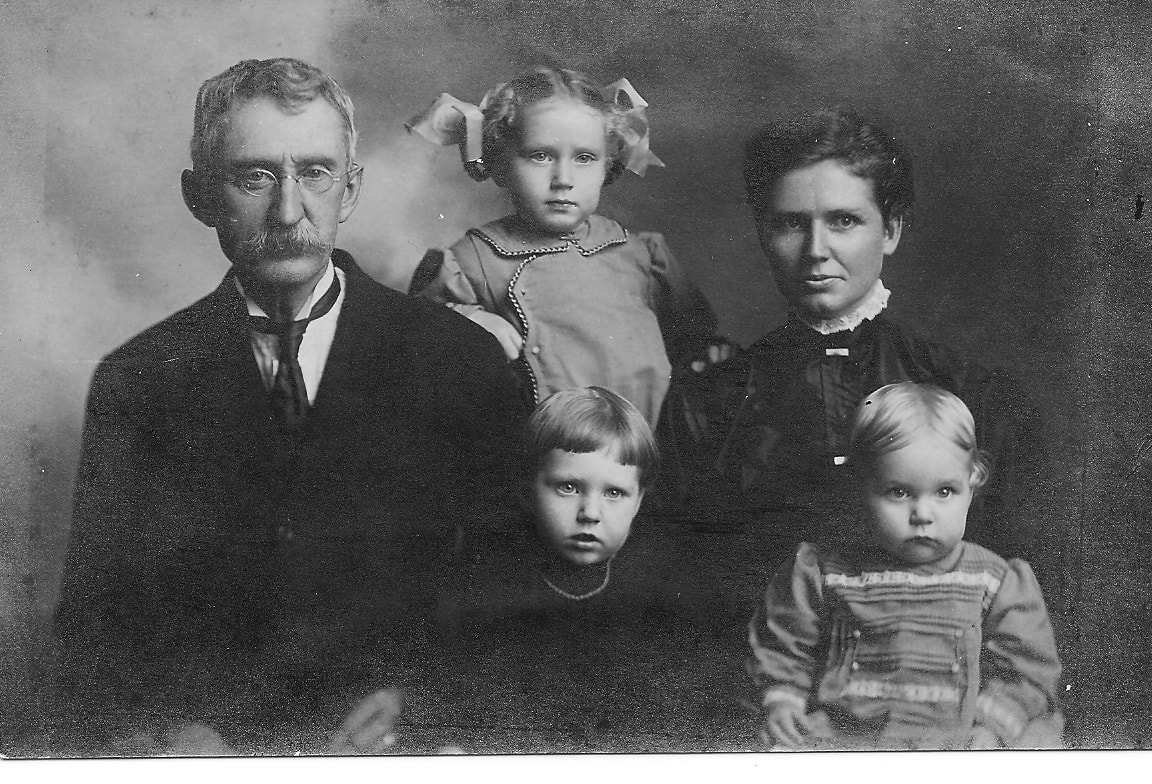 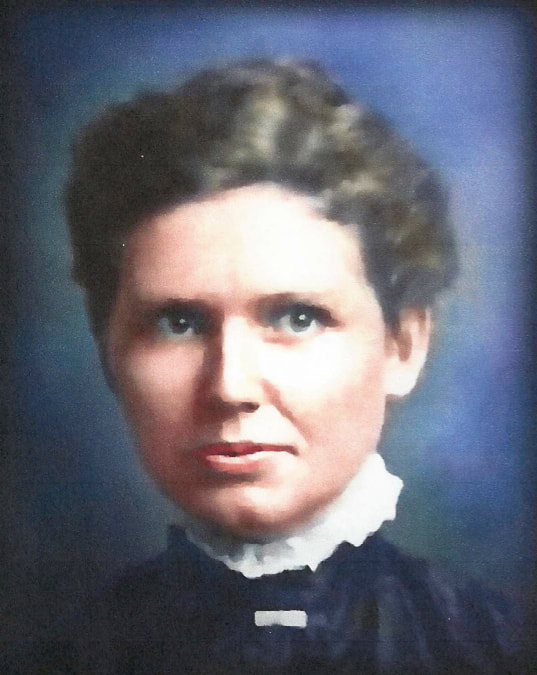 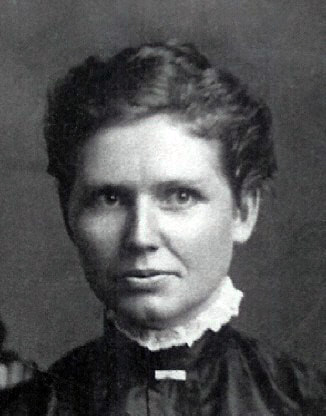 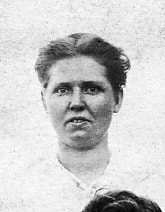 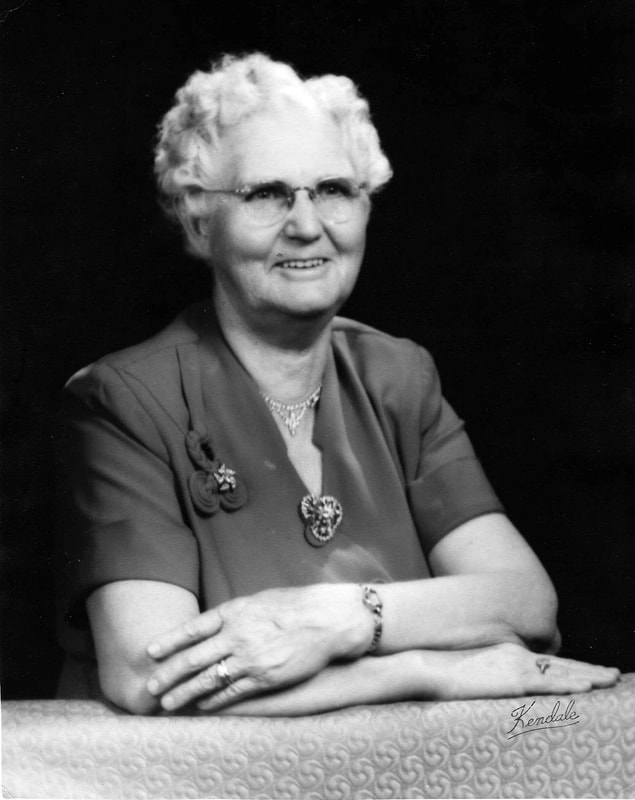 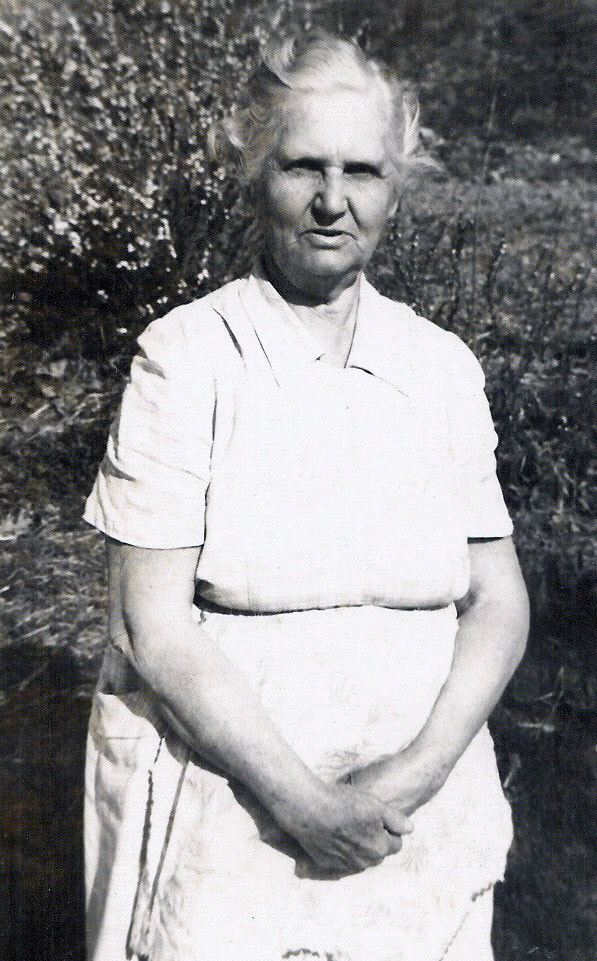 Cropped photos of the OTHER Bessie May (HUNT) LYONS  (1890-1970) - click for full version
​PLEASE REMOVE FROM HENSON-HUNT FAMILIES.


​DISCLAIMER: Research is ongoing; this page includes uncertainties and may contain errors.