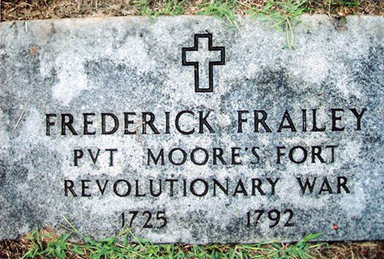 Grave of Private Frederick FRAILEY / FRALEY
Photo courtesy of findagrave.com
Claudia's 3-time-great paternal grandparents were Reuben FRALEY (1783? - after 1870) and Mary Polly FLANNERY (1792 - before 1840).  They were both born in Virginia, but raised their children in Kentucky and Arkansas.

The surname FRALEY has many spelling variations including FRILEY, FRAYLEY, FRAILEY, FRALY etc. ​

Reuben was the son of Frederick FRALEY Sr who was born in 1725 in Mannweiller, Donnersbergkreis, Rheinland-Pfalz, Germany.  He must have emigrated to the USA before about 1758 when he married Chloe in Rowan County North Carolina. We do not yet know for certain what Chloe's surname was.  Some believe she was also a Fraley by birth and a cousin of her husband.

According to other researchers, Fred and Chloe had 14 children, including Reuben, before Frederick died in Dec 1792 in Castlewood, Russell County, Virginia.  Frederick was a soldier in the Revoluntionary War.  According to his gravestone, Frederick FRAILEY was a private at Moore's Fort.  Although he died in North Carolina while away from home, he has a gravestone in the Old Fraley Cemetery in Russell County Virginia, located on property he once owned.

Reuben and Mary FRALEY probably had a daughter Phoebe FRALEY who was born about 1831 in Kentucky - she was listed as age 19 in the 1850 census.  But sources vary on this; some say she was born 15 Feb 1828?  Her birth record has not been found.   She married Jesse HENSON Sr probably before 1849 in Arkansas where their oldest son William was born.  In 1870 they lived in Shepherd, Crawford County, Arkansas, and owned property valued at $400. Of their 14 children, Claudia is descended from their third son John HENSON (1853 - 1935).  Phoebe outlived her husband, dying in Sept 1906, and was buried in Winslow, Washington County, Arkansas.
Claudia's FRALEY Pedigree:
More work is needed to verify these uncertain, earlier generations, but records seem to be quite scarce.  It is fortunate that both Frederick and Chloe left wills naming their children.

This area of my tree is tentative as it is based primarily on other compilations, usually unsourced.  And there is much speculation and variations posted on these early generations.  Validation is still needed but very hard to find.  The following is one theory only:

Reuben FRALEY's wife Mary Polly FLANNERY was born about 1792 in Virginia.  She is said to be the daughter of Silas FLANARY (1742-1792) and Violet MARSHALL (1752-1817), likely one of their youngest as they were married in 1773 in Russell County Virginia.  Silas was born in North Carolina, while Violet was born in Montgomery Virginia.  Silas FLANARY's name appears on a memorial in Nickelsville, Scott County, Virginia, dedicated to soldiers of  the "EARLY WARS in honor of those who served", including the Revolutionary War..  Both Silas and Violet were buried in Russell County Virginia.

Silas's father Thomas Elkannah FLANARY (1722-1781)  was born in Appalachian, North Carolina Colony.  Between Oct 1759 and Jan 1760 he was on the pay list as a private in the Cherokee War, part of John Canty's Company under the command of Col Richard Richardson.  He lived in the Raleigh area of North Carolina in the 1770s.   Some say Thomas married Elizabeth BLUEBACK (1725-1810) of Virginia Colony.  They both died in Illinois Territory.

Thomas's male descendants have been linked through Y-DNA testing to the Flannerys of Munster, Ireland.  And perhaps Scotland before that.

It is believed that Elizabeth BLUEBACK was the daughter of Jacob BLUBACK / BLUBAUGH (born 1698 in North Carolina) and Rebecca Hettie ZION (1702-1782), both in Lee County Virginia.  This is not adequately sourced.

Claudia's FLANARY Pedigree:
In addition to other trees on Ancestry, sources of Flanary information include:
"Windows Into Our Past The Longhunters, Volume 3", compiled by Judy Parsons Smith © 2001
Flannery Clan website, which includes a Y-37 DNA study.
​
Visit our HENSON page and linked reports for further information on
​descendants of Phoebe FRALEY and Jesse HENSON Sr.
​DISCLAIMER: Research is ongoing; this page includes uncertainties and may contain errors.