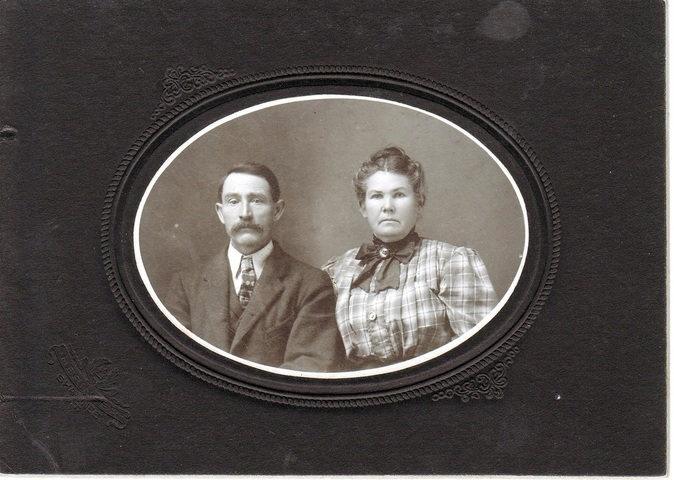 Portrait of John and Sarah Elmira (ORRICK) HENSON, probably taken in Shawnee Oklahoma
Claudia's paternal great-grandparents were  Sarah Elmira ORRICK (1858 - 1917) and John HENSON (1853-1935), who married about 1874 in Crawford County, Arkansas, USA.  Sarah was born 15 Feb 1858 in Arkansas, living with parents William Jackson ORRICK (1818 - 1893) and Rebecca Elmira DYER (1823 - 1900) and siblings in Mountain, Crawford County in 1860.  John and Sarah HENSON had 11 children, with all but the youngest born in Arkansas.  By 1900 their family was living in Davis Township, Pottawatomie, Oklahoma Territory (near Shawnee City) where their youngest daughter Elsie was born.  Claudia is descended from their son Henry Angus HENSON (known as Angus).

See Sarah's Fan Chart below, showing both the ORRICK and DYER lines.  There are still many roadblocks and gaps, yet some of the lines go back further than 6 generations.  Not all has been substantiated ...
​
​Here is Claudia's paternal pedigree leading back to this ORRICK and DYER couple:
The ORRICK line has been traced further back:
The DYER line has be traced as follows:
Regarding the early origins of the ORRICK name
According to the book by HARDY, STELLA PICKETT,  Colonial Families of the Southern States of America: A History and Genealogy of Colonial Families Who Settled in the Colonies Prior to the Revolution. Second edition. Baltimore: Southern Book Co., 1958. Reprinted by Genealogical Publishing Co., Baltimore, 1965 ...

The Orricks (or Oric, Orrok, Orrouck, Ourrouck, etc., as the name is varioiusly spelled) are of an ancient family of Scottish origin.  According to the authority of  “Nesbet’s Heraldry,” Vol. II.: “Simon de Orrock is without question the ancestor of the House of Orrock of that ilk in the County of Fife, reputed an ancient family,” and an honorable one.  Sir Simon de Orrock’s name is incribed [sic] upon the Ragman’s Roll, which for antiquity is the rival of the British Dooms Day Book.  The name of Orrick or Orrock is said to have originated from the rock upon that part of the Fife coast where lay the great landed estate of Orrok, belonging to the family of the same name.  A history of the Orrock or Orrick family of Scotland, whose arms continue to be borne by the Orricks of America, takes us back to the 13th century.

This book then outlines the genealogy of the ORRICK family of Maryland, beginning with the James Ourrouck (as spelled in his will probated 11 Nov 1690, his wife Mary acting as executrix).  This same James first “appears in the Colony of Maryland, about the year of 1650.”  This simple statement has been interpreted and indexed as "born in 1650"  and/or "arriving [immigrating] in 1650".  I believe this entry refers to James ORRICK (Jr) and his wife Mary SLADE, who are listed above as my 7-times-great grandparents.

From page 408, ORRICK FAMILY ...
ARMS - Sable, on a chevron engrailed or, between three mullets argent, as many chess-rocks of the first.
CREST - A falcon perched ppr.
MOTTO - Solus Christus mea rupes.​ 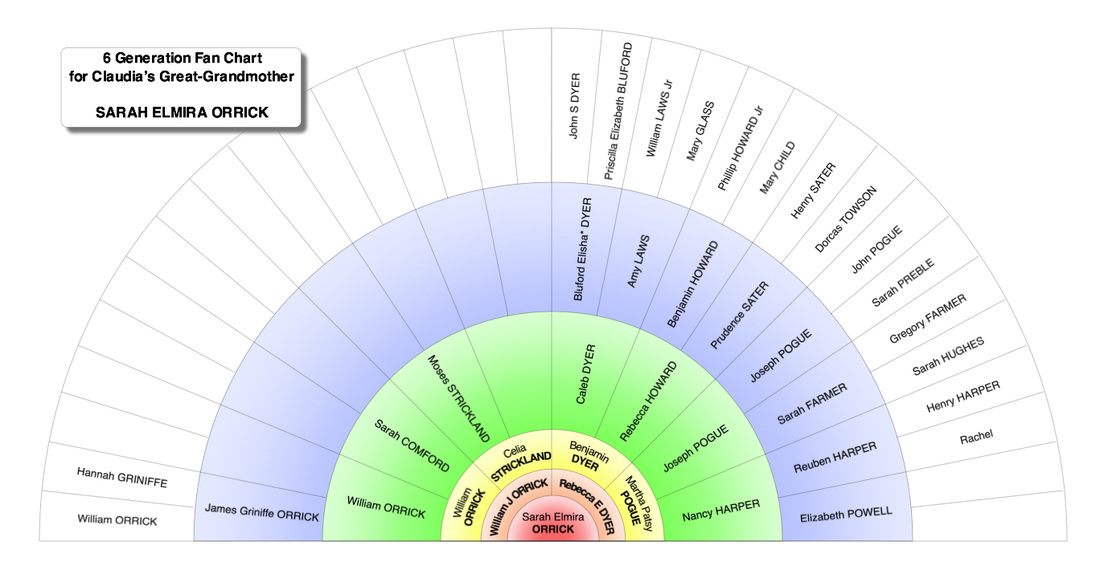 6-Generation Fan Chart for Claudia's great-grandmother SARAH ELMIRA ORRICK.
Updated 21 Jun 2016. Click to enlarge.
The story of Claudia's great-great-uncle Benjamin Lafayette ORRICK (1850 - 1917) has been posted on our blog.
​DISCLAIMER: Research is ongoing; this page includes uncertainties and may contain errors.